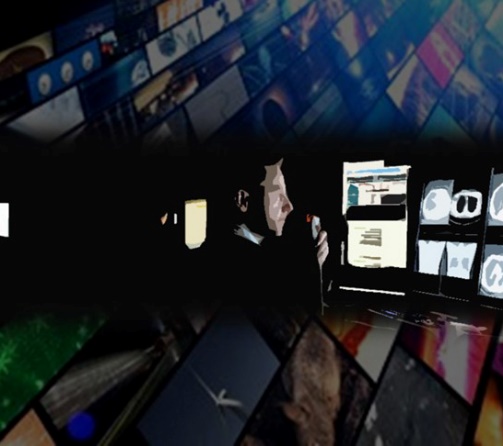 OK. You’ve borne with me long enough. I’ve shared with you various musings about Disruption. Connection. Complementarity. Now let’s talk about the elephant in the room.

AI seems to be on everyone’s mind nowadays. Born of Deep Learning, the latest generation of AI is now marching along as relentlessly as a cyborg in a sci-fi thriller. Newspapers, TED talks, water-cooler conversations, all endlessly trumpet the successes, or else issue dire warnings about the risks, of AI.

But what does AI mean for us? For the ISMRM, and for imaging in general, is it friend, foe, fad, or tool?

In Radiology, the question on everyone’s mind, and on everyone’s conference program it would seem, is “Will machines replace humans in reading images?” The opposing opinions on this question are by now well-rehearsed, ranging from Geoff Hinton’s infamous call to “stop training radiologists” to an increasingly familiar recent refrain from those steeped in imaging: “Keep training radiologists, since their day-to-day work is about to get much more interesting, with machines handling most of the humdrum, routine tasks, and acting as copilots to make human specialists better at the more complex tasks.”

Identifying normal anatomical features, or else detecting familiar hallmarks of pathology – these are tasks that are quickly succumbing to advancing neural nets, but they are also tasks that many radiologists would happily delegate in favor of worklists richer in “interesting cases.” Radiologist Eliot Siegel makes the thought-provoking point that identifying what is in an image is not really very hard, but the task of identifying what is out of place in an image, while mastered easily by every seven-year-old who delights in pointing out laughable incongruities in “what’s wrong with this picture” puzzles in children’s magazines, is generally acknowledged as a much harder problem for artificial brains.

As fascinating, or even as existentially gripping, as such questions may be, I would contend that they are not really (or, in any case, not solely) the right questions for our imaging community to be debating. The question I believe we should be asking is, “What unique skills and perspectives do we bring to the AI table?”

We are a Society of inveterate inventors, of tool builders and tool users. But are we really going to beat Google, Facebook, IBM, and the madding crowd of data scientists at their own game? Abstracts related to AI at our ISMRM Annual meeting grew by an order of magnitude from 2016 to 2017 (see table below), but what are those numbers compared to the explosion of AI interest around the world? How many of the AI articles appearing day by day on arXiv come from our community?

Alright, then. If the future is not exclusively ours to program, perhaps we can still play a key role as suppliers of that most valuable commodity in the AI industry: Data. Perhaps we will be the definitive source of MR images, and maybe the generators of image labels, for data scientists who come calling, as so many startups or even tech giants have already begun to do. Perhaps we will go down in history as enablers of the power of AI, graciously passing along the keys to our imaging kingdom. Perhaps. But – let’s be truthful – wouldn’t that be disappointing? Images are our products, but they are not the sole root of our skills. We too, I would argue, are data scientists, just of a different sort.

We are undisputed experts in at least two things that are absolutely crucial to the interpretation of images:

In the next week or so, I invite you to give some thought to how these two areas of expertise might condition your own approach to AI. Or how they might inform our strategy as a Society when it comes to one of the most fast-paced facets of our rapidly changing world.

Next time: Let’s talk a little more about AI