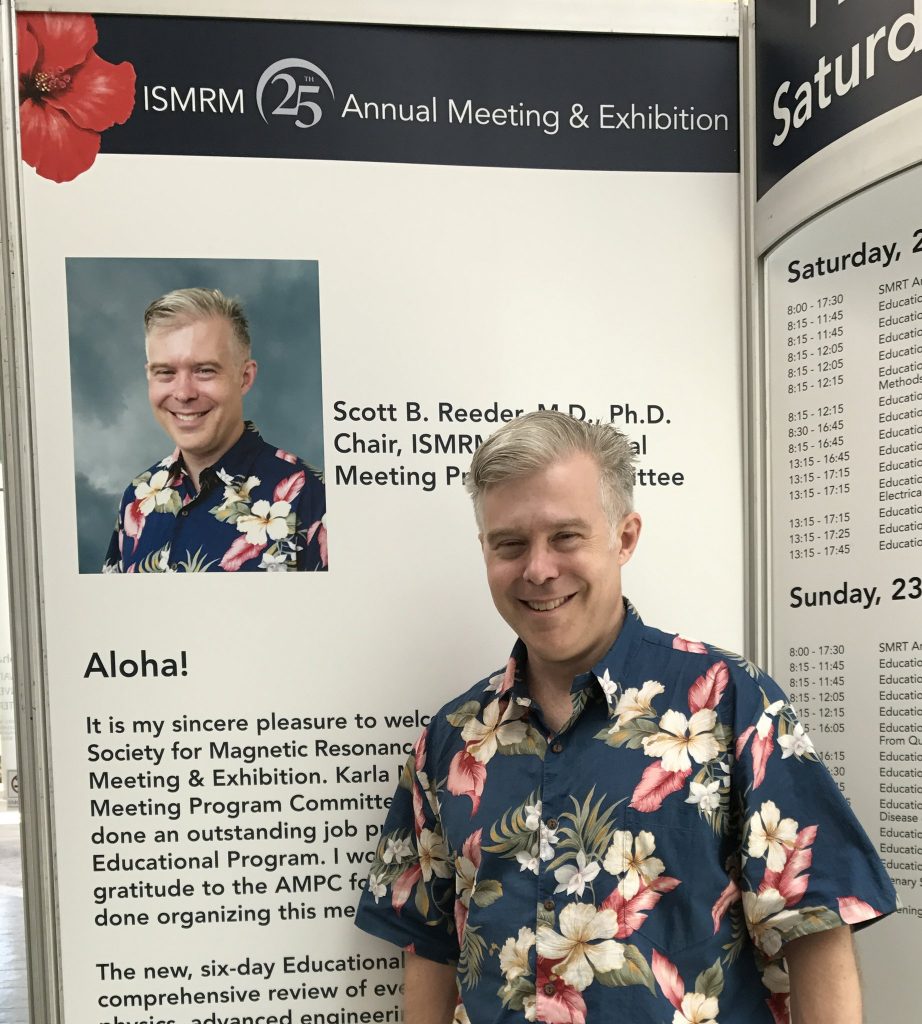 Scott Reeder is a radiologist and professor at the University of Wisconsin, specializing in the development of MRI methods to study liver disease and hypertension. He is also one of the most visible ISMRM people in 2017, thanks to his role as program chair of the annual meeting in Honolulu. With the 2018 ISMRM deadline looming large, we thought we could have one final look back at the ISMRM in Hawaii and give you a glimpse of what keeps Scott (and the ISMRM) on the move. 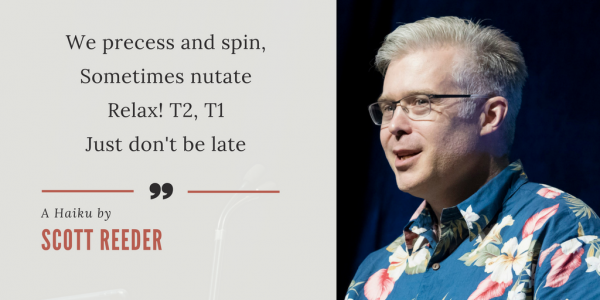 Erika Raven (ER): Being that you’re based in the northern climes of Wisconsin – did Honolulu have a special sway for you?

Scott: Who wouldn’t love to come to a beautiful location like Honolulu? I’ve been to both of the other Honolulu meetings, so when I found out I’d have the chance to organize this year’s meeting I was thrilled. 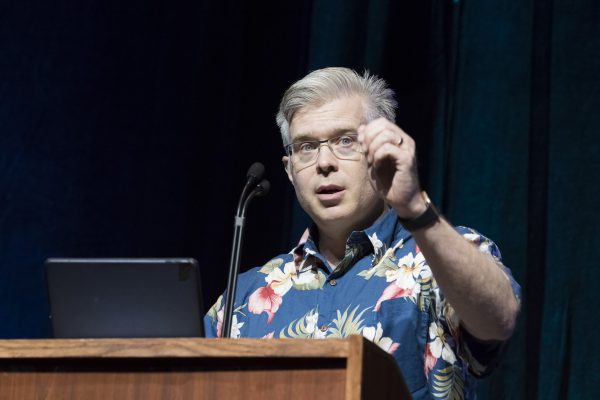 ER: You seem to project a laid-back vibe by exclusively wearing Hawaiian shirts. What actually went into the preparation of the meeting?

Scott: First of all, the annual meeting program committee (AMPC) is a committee of approximately 80 members. It’s a very diverse committee of MDs and PhDs, from all around the world. They’re responsible for everything that happens from social events, plenary sessions, named lectures, and then the biggest work really boils down to the educational and scientific programs. We start about a year and a half ahead of time, and there is work that happens all throughout the year, but our major efforts happen during the construction meeting in January.

ER: What kind of wiggle room is available for sessions after the construction meeting – for example how did you plan for the late-breaking abstracts?

Scott: Let me tell you how that works. We receive the abstracts in November. They’re reviewed by a large number of reviewers, including the committee. Then in January we plan the scientific program, and we have a limited number of slots, based on the number of physical slots available in the convention center. For the late-breaking abstracts, we intentionally carved out one slot that we did not populate with abstracts from the original submission. Then by brainstorming and vote the AMPC chose machine learning for the late breaking session. We actually had 100 abstracts that were submitted for 10 talks, which was a really terrific response from the membership. 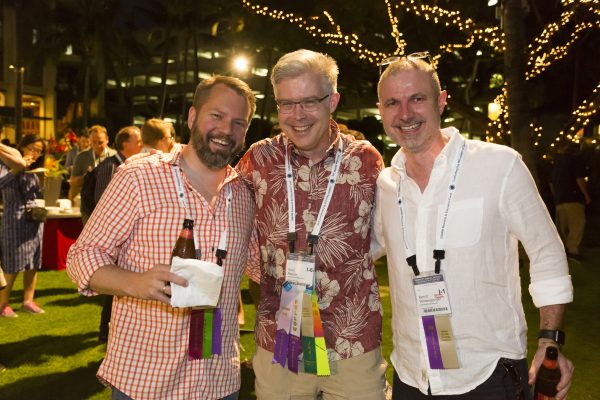 ER: Can you highlight any notable differences that were implemented at this meeting?

ER: The Fun Run was definitely fun, if you like running of course.

Scott: Yes! And also the schedule change. There used to be sessions on Friday morning, but I thought the schedule was getting a little stale. Not only did we get rid of the Friday, but we also moved the plenaries to 10:45am rather than 8:30am. And the last thing is because we rearranged the schedule, we were able to increase the scientific and educational content. We had more educational talks than ever before, and about 12% more scientific talks.

ER: So you optimized it.

ER: Let’s shift gears from your Chair duties, and talk about your role as a physician scientist. What was your motivation for taking this path?

Scott: You know, I have a lot of interests, but I’m kind of an engineer deep down, and imaging is so cool. The fact that you can peer inside the human body with radio waves and magnets is really incredible. It’s like the stuff of science fiction. When I’m in the reading room, I find myself thinking about how can we make the images better or faster, you know, get new information we didn’t have before. And then when I’m in the lab, I can bring back my clinical experience, and bring a lot of perspective that my students don’t have. So I kind of think both ways, and it’s really fun to pull that together.

ER: How do you see radiology living together with machine learning?

Scott: Oh, I can’t wait. I can’t wait for this to happen, I mean it is happening now, but in terms of actually impacting us clinically I think is going to be the best tool that we’ve ever had.

Scott: Not at all! In fact my brother-in-law is a computer scientist and he tells me I’m going to be out of a job in ten years, but the reply is no – you’re actually going to be working for me! I tease him like that. But in all seriousness, it’s really going to help us take care of custodial radiology. A lot of what we do will never be replaced by a machine. We do see patients, treat them and talk to them. There are a lot of safety issues, and then there are complex and unique cases. I’ve been practicing radiology for nearly 18 years and I still see cases I’ve never seen before which means a machine is not going to be able to handle that. I think it will be an amazing tool to help us leverage ourselves to make us even more relevant. So, I can’t wait. I think it’s going to be great.