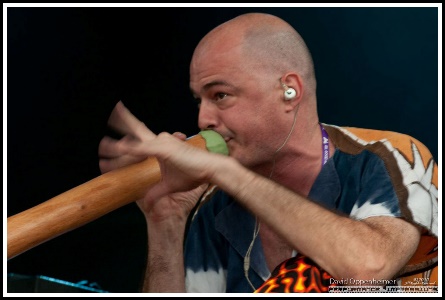 The Rhythm of Change
(for Graham)

My dear friend Graham Wiggins passed away a year ago this week.  For those of you in our Society who knew him, and for those of you who didn’t, I would like to reflect briefly on Graham’s approach to MR, to science, and to life.  Graham was one of our leading lights in RF engineering, in high-field magnetic resonance, and in the generation of technological solutions to important clinical problems.  He was also an improvisational genius, as anyone who ever heard him captivate an audience with a slender wooden tube known as a didgeridoo can attest.  He would lay down complex rhythms and vocalizations, one after the other, recorded with a press of his foot on a looper pedal, and before you knew it, you would be swimming in a sea of sound, swaying back and forth in sonic currents of his unique devising.  I can picture him now, seated on stage in his signature Hawaiian shirt, one hand on the didg, the other dancing in air, gear arrayed at his feet, a nexus of modern electronics and aboriginal tradition, of technology and creativity.

I don’t think Graham’s experience of MR was, at root, much different than his experience of music.  He was always open to inspiration, seeing potential new coil designs everywhere: a soccer ball, or a football helmet, or a vine-laden trellis, or a colander on a shelf.   His unrelenting improvisation, however, was always supported by a framework of deep insight.  Every wild brainstorm would be followed by an intensely – and I do mean intensely – rigorous poring over the data.  Each device was built and rebuilt and rebuilt again, to make sure its best performance was no fluke.  Every theoretical explanation was stress-tested, subjected to Graham’s fierce will to understand.  And when at last he was confident that he understood, he would use that understanding to lay down yet another stratum of improvisation.  Graham was a maestro at any frequency.

In Graham’s approach to breaking new ground, I see lessons for our changing world.  His delight in questioning assumptions, and in ferreting out new truths, is an essential skill for those who wish to refashion a field in flux.  He had a fierce resistance to mere hype, which can always masquerade as disruptive innovation, but he also did not hesitate to gather in any new tool that might prove useful to his designs, no matter how threatening that tool might be to the status quo.  We would all be well served, as he was, by mixing rapid prototyping with careful validation; by championing both new paradigms and abiding truths.  With the right balance of grounded skepticism and restless creativity, each of us can aspire to combine the best of the old with the strangest of the new.

Thinking of Graham reminds me that time, which is always precious, becomes that much more so in a rapidly changing world.  It pains me greatly that Graham will never see the transformations that have gripped our field even in the last year, not to mention the myriad innovations that are in store in years to come.  As for us, we can either be carried along by the currents of change, or we can choose to create them. Over the course of the next week, when you have a moment, try looking at things a little differently.  Try to see the coil in the colander.  Identify something new in what is familiar, in Graham’s honor, and in honor of all the innovators who helped to lay down the rhythms that move us today.